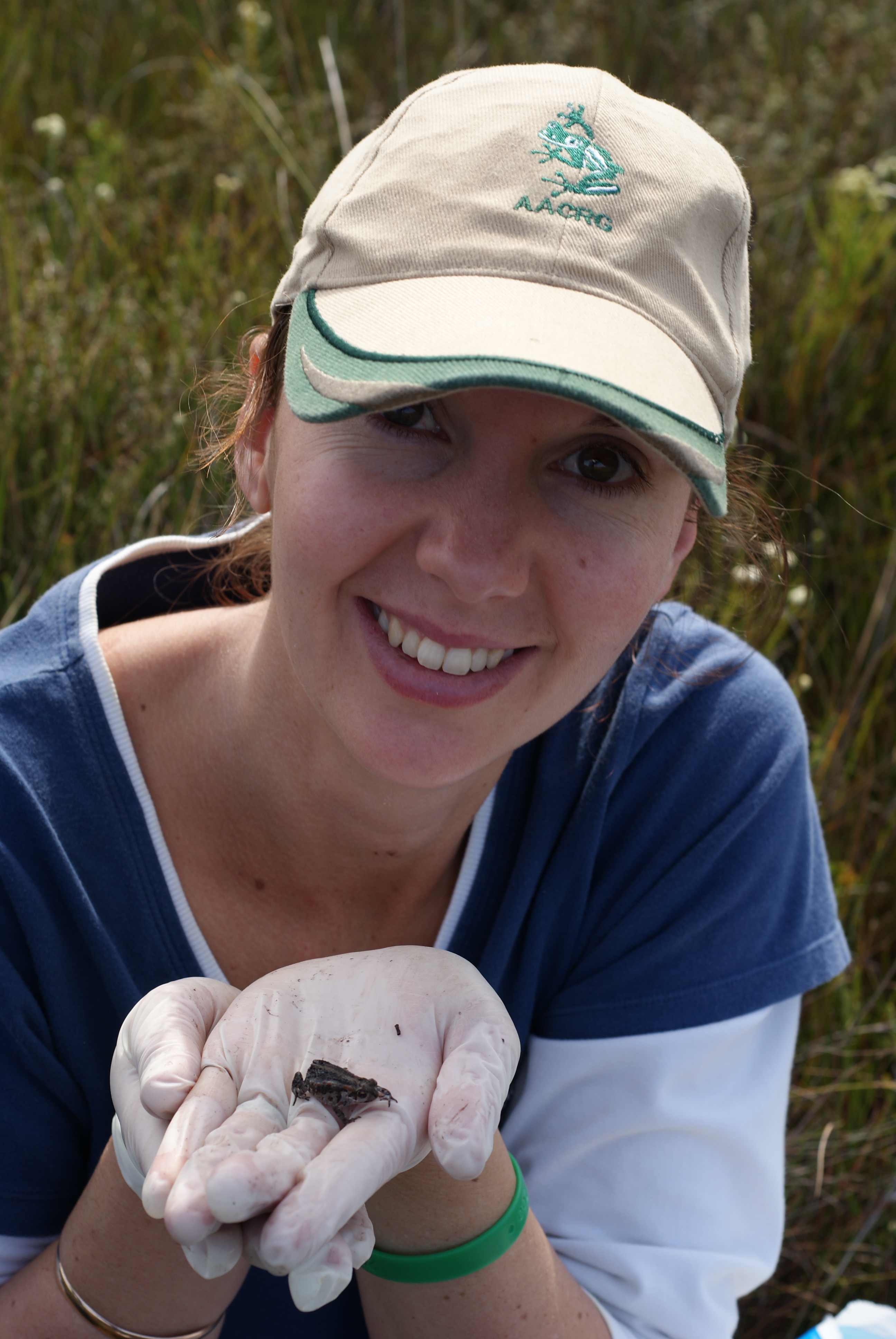 A conservation biologist from South Africa has won a prestigious Whitley Award worth £40,000 to support her quest to save threatened amphibians.

Dr Jeanne Tarrant, known locally as the “Frog Lady”, works for the Endangered Wildlife Trust (EWT), an Amphibian Survival Alliance Partner, where she manages the Threatened Amphibian Programme. The EWT is the only NGO in South Africa to include frogs as a conservation focus.

The Whitley Awards, often referred to as ‘Green Oscars’, are awarded annually to individuals from the Global South by UK-based conservation charity the Whitley Fund for Nature. Jeanne is one of six conservationists to be recognised this year for their achievements in nature conservation.

Amphibians are the most threatened group of animals on the planet with 41% of all species at risk of extinction. Almost two-thirds of the country’s 135 frog species are found nowhere else, making South Africa a priority for amphibian conservation. Despite this, a combination of threats from habitat loss due to mining, agriculture and pollution are putting the country’s frogs at risk.

In some South African cultures, frogs can be associated with witchcraft, making them often feared by locals. Jeanne’s educational work aims to dispel such myths and raise awareness and appreciation of the important role frogs play in the health of the environment and ecosystem. The EWT’s national awareness Leap Day for Frogs has attracted some 15,000 participants over the past five years. Jeanne has inspired school children with her “ Frogs in the Classroom” learning programme, gaining young fans and earning her the title of the “Frog Lady”.

Growing up in the southern Drakensberg mountains of KwaZulu-Natal, Jeanne was surrounded by nature. Following her undergraduate studies, she worked in the UK for five years before returning to her homeland of South Africa to specialise in the research of threatened South African frogs.

Some of the species that Jeanne and her team conserve include the Critically Endangered Amathole Toad, which had not been seen for over 13 years until Jeanne and her colleagues re-discovered it in 2011. Jeanne also works with the Endangered Pickersgill’s Reed Frog, with the number of known localities of this tiny 2cm amphibian on the rise thanks to her efforts.

In addition to education and field work, Jeanne works with government to ensure enhanced protection for frogs on a policy level. Supported by WFN, her team will produce a 10-year conservation and research strategy for South African frogs and protect 20,000ha of amphibian habitat conserving 8 species.

Jeanne said: “While South Africa has excellent environmental legislation, illegal developments continue to destroy frog habitats. Our aim is to not only improve appreciation of frogs through research and education but use our slippery friends as flagships for the wider conservation of vital freshwater and terrestrial areas that are under the increasing threat of humans. The fact that almost half of amphibians are experiencing declines should be a massive wake-up call to humanity that all is not right with our planet – most people however are unaware that amphibians are even in trouble.”

Edward Whitley, Founder of the Whitley Fund for Nature, said: “Jeanne is an inspiring leader who tirelessly advocates for amphibians – an often overlooked group. We hope that this Whitley Award will allow her to spread her important message far and wide, and bring about real change for amphibians and their habitat through science, policy, and community education.”

Six conservationists have won Whitley Awards and will each receive £40,000 in funding to support their work with a range of threatened species. While normally presented to winners by charity Patron HRH The Princess Royal at an annual Ceremony in London, the 2020 Whitley Awards Ceremony was postponed due to the COVID-19 pandemic. Whilst the winners will receive their funding now, they will be invited to attend a ceremony and related events in London later this year to celebrate their achievements, should circumstances allow.

This year’s Whitley Gold Award honours Brazilian conservationist Patrícia Medici for her outstanding dedication to protecting South America’s largest land mammal, the lowland tapir, using it as a flagship for largescale habitat preservation. Patrícia is a world expert in the science of tapir conservation and has dedicated her life to shedding light on this unusual looking, yet little-known species. Against a backdrop of political and environmental instability in Brazil, her work is more important than ever. The Whitley Gold Award enables the expansion of her work to the embattled Amazon.

Visit www.whitleyaward.org to find out more.