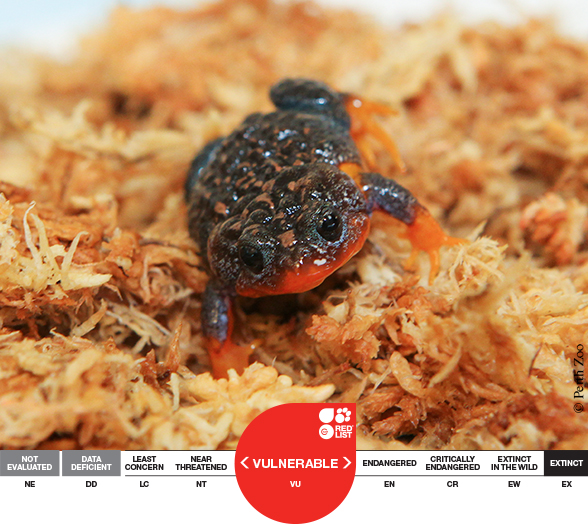 Discovered in 1994, the spectacular-looking Sunset Frog, Spicospina flammocaerulea, inhabits permanently moist peat swamps and is known from only approximately 27 sites in two catchments in southwest Western Australia. About half of the sites are found on private land and the others are in the Mount Franklin National Park. It is a beautifully-coloured frog and quite small, growing only to about 35mm (1.4 inches).

The Sunset Frog listed as ‘Vulnerable’ in the IUCN Red List of Threatened SpeciesTM, and is listed as Endangered under the Australian Environment Protection and Biodiversity Conservation Act, due to its very limited geographic range.

In 2007, the Perth Zoo in Western Australia began a husbandry research program for this species (eggs collected from the wild were taken to the Zoo to be raised to adulthood and adult frogs were also collected from the wild and maintained at the Zoo to develop husbandry and breeding techniques). The purpose of this program was to develop appropriate skills for breeding and rearing Sunset Frogs in case the wild population numbers decline drastically and a rescue program becomes necessary. Adults that were head-started from wild-collected eggs bred successfully at Perth Zoo in 2011, and the program was subsequently stopped as the objectives had been met and the wild populations were (and remain) stable. Thirty adult frogs and 251 tadpoles were released to the wild in late 2011 to establish a new population in a third catchment (i.e., a conservation introduction to mitigate the effects of catchment-wide disasters). This was carried out in conjunction with the Western Australian Department of Parks and Wildlife.