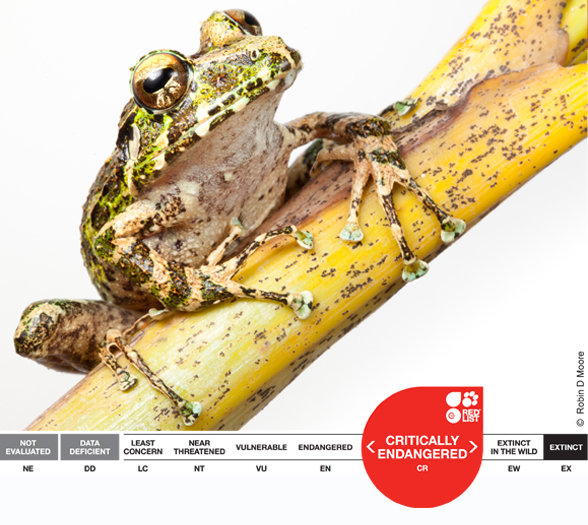 The Spiny Giant Frog, Eleutherodactylus nortoni, is listed as ‘Critically Endangered’ on the IUCN Red List of Threatened Species. It is found in the montane forests of south-western Haiti and the Dominican Republic.

The primary threat to this frog throughout its range is habitat destruction due to extraction of wood for charcoal production and agriculture, which is ongoing even in the protected areas of the Tiburon Peninsula of Haiti and Massif de la Selle. Similarly, deforestation is taking place at the only known locality of the Spiny Giant Frog in the Dominican Republic as a result of mining, charcoaling and agriculture.

Although the Spiny Giant Frog occurs in two Haitian national parks, Macaya and Morne La Visite, there is no management of these areas for conservation and the habitat continues to be destroyed. This species is also known from the Dominican national park Sierra de Bahoruco, which is better managed than those in Haiti; however, degradation of the habitat within this park’s limits also continues. Strengthening the management of these protected areas is essential for the survival of this frog, as is maintenance of the remaining habitat.