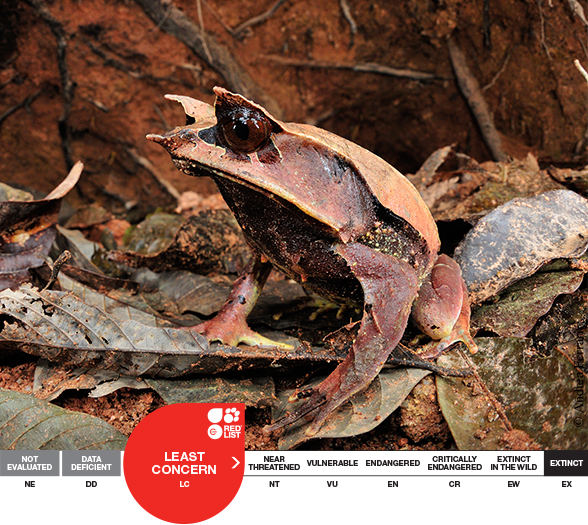 The striking-looking Long-nosed Horned Frog, Megophrys nasuta, is a rainforest species which occurs from southern Thailand, through Peninsular Malaysia, Singapore, Sumatra and Borneo. It is generally a lowland rainforest species, but in some areas occurs at higher elevations. Its upper eyelids and snout are elongated, forming what look like horns, hence it’s common name. Apart from the unusual “horns” it has remarkable camouflage patterning, making it very difficult to see amongst the leaves on the rainforest floor.

This species is listed as Least Concern in the IUCN Red List of Threatened SpeciesTM, however it is listed as Endangered in the latest national Red List for Singapore, primarily due to the lack of suitable stream habitat and the lack of effective habitat protection. Experts in Singapore recently suggested that without effective habitat protection, the species could soon become extinct in Singapore, where it is thought that there are possibly only between 50-100 animals left in the wild.

A captive breeding program for the Long-nosed Horned Frog has been established at the Singapore Zoo in an effort to increase the population, and eventually to release animals back to the wild in Singapore.