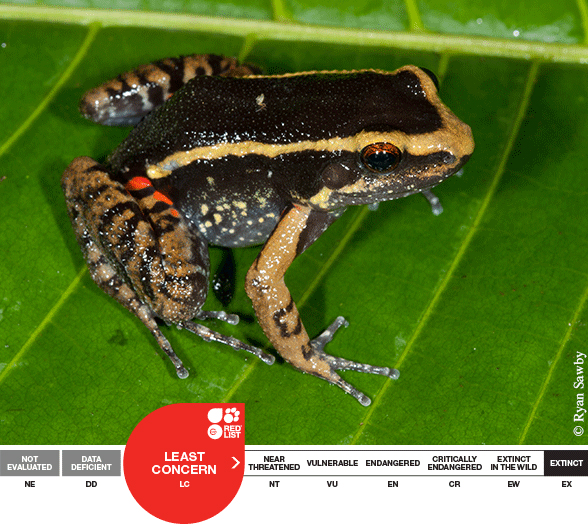 Lithodytes lineatus is listed as ‘Least Concern’ on the IUCN Red List of Threatened SpeciesTM. This handsome leaf-litter frog with bright yellow stripes, which has no common name, is found primarily in Amazonian forests of Ecuador, Eastern Peru, Bolivia, Brazil, southern Venezuela, and the Guianas. Lithodytes lineatus is found in both terrestrial and freshwater habitats but is primarily found in tropical rainforests, foraging below leaf-litter, logs, and other forest cover. In southwestern Amazon, Lithodytes lineatus is one of the most common leaf litter frogs but they are often undetected in surveys because of their close association with and use of leaf-cutter ant nests during their breeding period.

There is currently not enough information to distinguish proper threats to this species. According to the IUCN, Lithodytes lineatus is listed as Least Concern because of its wide distribution, presumably large population, and a possible ability to tolerate a degree of habitat alteration. Its ability to adapt over a long period of time is unknown.

There are no current conservation measures being undertaken for this species because of its classification and because of its presence in many protected areas. However as tropical rainforests are destroyed from logging and mining, known threats to the Amazon, more studies are needed to thoroughly understand this species and re-assess its conservation status.