Where there’s a will there’s a way: working together for the conservation of Darwin’s Frogs

A paper published today in Oryx—The International Journal of Conservation outlines the development of a multi-participatory binational conservation strategy for Darwin’s frogs (Rhinoderma spp.), an initiative that was led by ASG’s Chile Regional Working Group. These two frog species, found in the temperate forests of Chile and Argentina, display an unusual behaviour not known in any other amphibian – the adult male frogs take the eggs into their vocal sac, where they grow, protected, into tadpoles and young froglets.

Concern for the future of these species prompted the development of the conservation strategy.

“Many people, and much effort and resources are dedicated to species conservation worldwide. However, coordinating existing work and planning future actions under a species conservation strategy, is one of the most effective ways to halt species extinctions” explains Dr Claudio Azat, lead author of the study, Co-chair of the IUCN SSC Amphibian Specialist Group for Chile and Associate professor at Universidad Andres Bello, Chile.

The bulk of the planning process was undertaken at the Huilo-Huilo reserve, where a range of stakeholders representing varied interests, including representatives from local and international NGOs, zoos, academic institutions, government and private industry, gathered to review the species’ status, undertake a threat analysis, and develop conservation priorities.

Dr Ariadne Angulo, Co-chair of the IUCN SSC Amphibian Specialist Group, who co-facilitated the strategy development workshop, said “It is inspiring to witness different sectors joining forces to support the conservation of Darwin’s Frogs. By working together across political boundaries and under one umbrella approach, range state countries and members of the international conservation community have an opportunity to make a substantial difference in the conservation of Darwin’s Frogs and their habitats”. 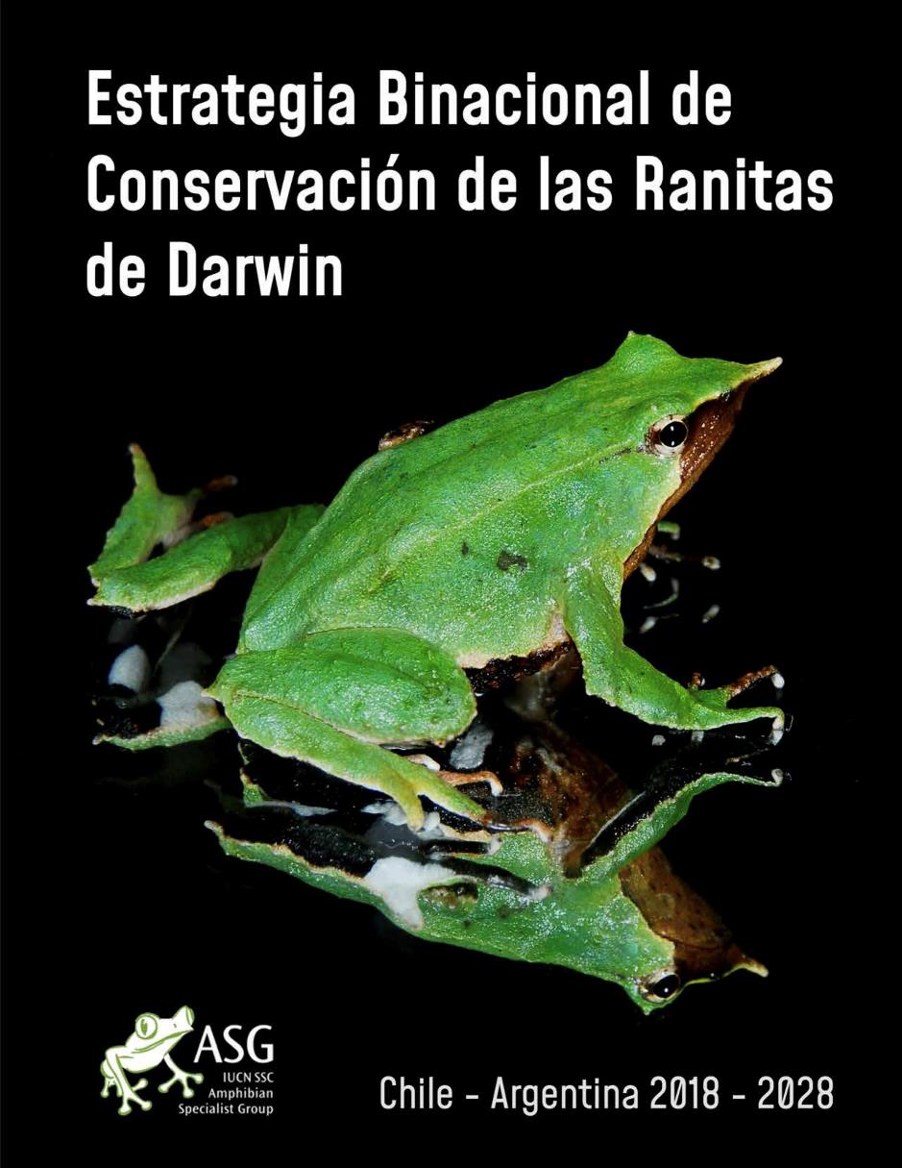 As part of the conservation planning process, workshop participants developed the following Vision: Darwin’s frogs, unique in the world for their reproductive peculiarity, are conserved and valued as an emblem for the protection of the native forests of southern Chile and Argentina.

“This conservation strategy is one of the few examples of a frog being used as a flagship for the conservation of an entire habitat, the temperate forests of Chile and Argentina” said Dr Azat.

A threat analysis carried out as part of the strategy development identified habitat loss, infectious disease, and climate change as the major threats to the survival of the Darwin’s frogs. Actions to mitigate the effects of these threats were developed during the workshop, which included both in-situ and ex-situ management activities.

“The National Zoo of Chile is continuing its work as a reference centre for the captive breeding of Rhinoderma darwinii, by committing to undertake some of the actions developed under the Rhinoderma Strategy” said Guillermo Cubillos, Head of the Conservation and Research Unit, National Zoo of Chile. “These include the development of captive husbandry protocols, and improving communication and collaboration between the different breeding centres to expand the genetic representation of the captive population of this species.”

This conservation strategy promotes collaboration and coordination of all conservation efforts towards a common goal; all parties working together increases the chances of succeeding in conserving these unusual frog species.

“The conservation of Darwin’s frogs is relevant from an evolutionary, ecological and cultural point of view” said Andrés Valenzuela Sánchez, president of the local-based organization ONG Ranita de Darwin. “Darwin’s frogs are special not only for their unique reproductive behaviour, but because they are evolutionarily distinct from most other amphibians. Second, these frogs used to be one of the most common and abundant amphibians in the Southern South American temperate forest and may play a critical trophic role in this threatened ecosystem. Last but not least, Darwin’s frogs appear in the Pitrén complex pottery (with vessels dating to 1200-2000 years BP) and remain as an important component of our present-day biocultural heritage”.

Amphibian Specialist Group
The Amphibian Specialist Group (ASG) is part of the Species Survival Commission (SSC) of the International Union for Conservation of Nature (IUCN). It provides the scientific foundation to inform effective amphibian conservation action around the world. Under the umbrella of the ASG, the Amphibian Red List Authority oversees the assessments of all amphibians on The IUCN Red List of Threatened Species. ASG, together with the Amphibian Survival Alliance (ASA) and Amphibian Ark, share a common vision of “Amphibians thriving in nature”. Learn more at https://www.iucn-amphibians.org/.

ZSL
ZSL (Zoological Society of London) is an international conservation charity working to create a world where wildlife thrives. From investigating the health threats facing animals to helping people and wildlife live alongside each other, ZSL is committed to bringing wildlife back from the brink of extinction. Our work is realised through our ground-breaking science, our field conservation around the world and engaging millions of people through our two zoos, ZSL London Zoo and ZSL Whipsnade Zoo. For more information, visit www.zsl.org.