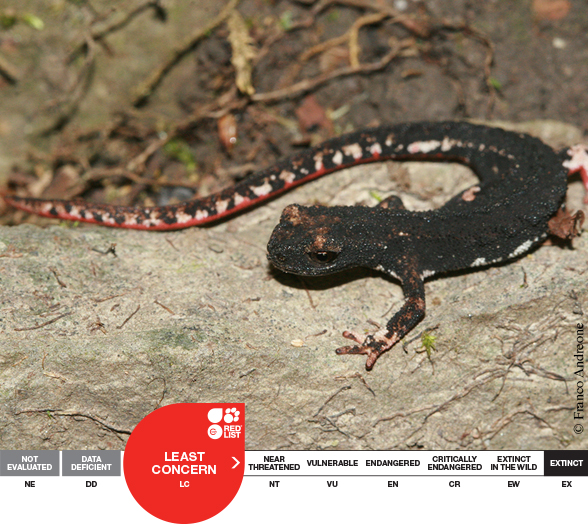 The Northern Spectacled Salamander, Salamandrina perspicillata, is a peculiar salamander belonging to the Salamandridae family. It is currently assessed as Least Concern (LC) by the IUCN Red List of Threatened Species. Formerly all the populations of this genus were believed to belong to a single species endemic of the Italian Peninsula, The Spectacled Salamander, Salamandrina terdigitata. Molecular investigations showed that in reality two different species are evident, the northernmost one deserving the name of Salamandrina perspicillata. Both the species of the genus carry out an almost secretive terrestrial life, mostly hiding within terrestrial refuges of the temperate woods where they live. Mating occurs on land, and the female is led by the male to pick up a spermatophore (a capsule of sperm produced by the male). During temperate Spring (usually the months of April and May), females reach the oviposition sites (which are usually represented by slow-running Apennine streams), and become aquatic. Then, they lay the eggs, which are usually attached to submerged objects, such as dead branches, stones and plants. Larvae develop in water until metamorphosis, which occurs after 2-5 months, depending on temperature and local conditions.

The Northern Spectacled Salamander is threatened by a series of human actions, such as habitat alteration, habitat isolation (due to road-construction), and local water pollution. The presence of introduced fish (such as trout) in streams where they were originally absent may constitute a danger too.

Conservation actions include local protection of the egg-laying sites, and under-road tunnels to assure the passage of individuals during migrations. Several populations are included within protected areas.